Union Homes and Condos for Sale

Union is a delightful township in Union County, New Jersey, with a population of close to 57,000 residents. Union is ethnically-diverse, with a large Hispanic population as well as Portuguese, Irish, Polish, and German. In fact, almost 30% of its residents were born in another country.

It is an attractive place to live and boasts a convenient commute into Manhattan by bus, train or car. Adding to its allure, home prices in Union township are some of the lowest in Union County. Many homebuyers settle in Union and upon doing so, tend to stay.

Its history is of interest to many who move to Union. In the 1800s, Union was known as Connecticut Farms, and is the site of the historic Battle of Connecticut Farms, one of the last battles fought in the American Revolutionary War. Streets are named after soldiers who fought in the war and American flags line the streets creating that idyllic community people are looking for when they dream of owning a home. Furthermore, the old-fashioned Union Center has shops, pubs and restaurants with diverse ethnic fare, including Italian and Filipino.

There are plenty of parks in which children can play and Union’s schools boast higher-than-average test scores. Kean University is worth a visit as it plays host to Liberty Hall Museum, the home of William Livingston, New Jersey’s first elected Governor. There, you will find two centuries’ worth of artifacts including letters written by Thomas Jefferson. With all of these spectacular amenities and features, Union is clearly a wonderful community to call home.

If you would like to buy a home in Union, New Jersey, please do not hesitate to contact us today for more information.

Wait until you walk into this one, move right in and make it your own. Welcome home to 236 Carnegie Pl in Vauxhall Community in Union Township! This 3-bedroom 2-bathroom ...

Come and take a look at this beautiful 3 bedroom, 2 1/2 bath, single-family home in the highly desired Putnam Manor section of Union, NJ. The large Weeping Willow in the ...

Welcome to this Well-maintained 3 bed 3 bathroom cape cod located on a dead end street with close proximity to route 78 and walking distance to Union High school !This p...

Perfect for office, lot of potential. Owner will arrange with tenant for renovation.

Come see this beautiful fully renovated 4 bedroom 2 bath Colonial in a desirable neighborhood in Union! You can just unpack and move right in! When you enter the house,...

Excellent location in Battle Hill area, an impeccable colonial style home with a spacious family room and full bath expansion off the gourmet kitchen with an island and n...

Located in the heart of one of the most desirable sections of Union Township, this spacious bi-level home checks all the boxes. It has a total of 4 bedrooms, 2 full bathr...

Come see this gorgeously maintained bi-level which sits in the heart of one of Union's most peaceful neighborhoods. On the top level you'll find a newly renovated open ki...

Come see this wonderful raised ranch home! Walking in to the ground floor you're met with a welcoming living room and kitchen. One full bath and laundry area round out th...

Warm and inviting Dutch Colonial on an oversized private lot in a dead end street. Bright and airy this home has been lovingly cared for. Many newer features include roof...

Calling all Builders! Investment Opportunity! Here is your chance to build on this gorgeous street in Union Township. Surrounded by other beautiful homes this lot is th...

Beautiful large Colonial home in a desirable section of Union Township. Included in this unique property 5 bedrooms, 6.5 bathrooms, In every bedroom you will find an "ens...

This charming stone front colonial, in the sought after Putnam Manor section, offers the perfect opportunity to add your vision. The main floor foyer opens to a spacious ...

Looking for the perfect home in the perfect place? Chances are you'll want to check here first. 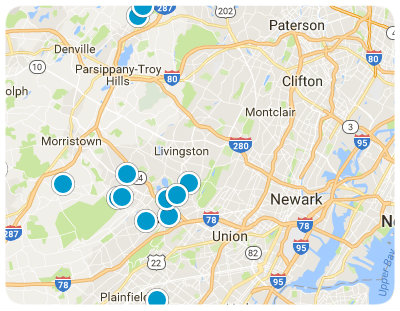